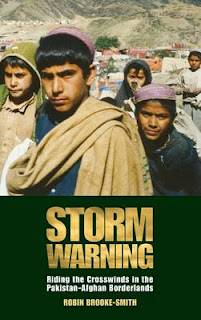 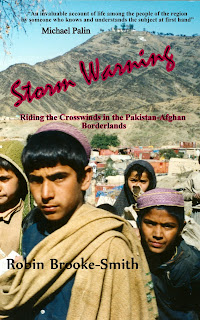 I've been reading a book that has taken me back to our Peshawar days. Storm Warning: Riding the Cross winds in the Pakistan-Afghanistan Borderland (Radcliffe Press 2013) by Robin Brooke-Smith, who was Principle of Edwardes College Peshawar

The title comes from an Iqbal couplet which is cited by the head of Pakistani Intelligence Service the ISI in Peshawar:   "Oh Eagle do not fear the crosswinds / They are blowing to make you fly higher.'

Robin is a close friend. We overlapped in Peshawar, when I was working in a Drug rehabilitation project as Drug Advisor. I used to go round to the Principal's House to watch rugby on occasions, for a meal (I remember Scottish Country Dancing there)  and even preached in the little chapel. Robin used to come round to our house in University Town to watch a video and get a way for a short while.  Reading the book was to be transported back to those heady days.

I even appear in the dramatis personae at the front of the book as 'CMS representative for South and Central Asia'  and I know a number of the characters in the book, mainly from the church side:   Bishop Manu (USPG Gen Sec), Humfrey Peters the Diocesan Secretary  Cecil Williams (Principal of Edwardes High School and then Bishop), Rev Ghani Taib, Col. Tressler and Col. Khanwal Isaacs, the college bursar. We know each other, we have shared bread together.   I am facebook friends with a  number of them.

I also developed a great affection for the Principal's house staff: Ilyas the chowkidar, the driver   Fayaz, Raj the mali, and of course  Yousef the cook, who used to bring me sweet milky 'bed tea' when I stayed over during later visits. I also remember 'Jet' the mine-dog (we also had a ex-UN, failed-mine dog called Nicker, who we renamed 'Snicker'!)

Our son Tim had a term at Edwardes College School in the hot, humid summer of 1996 that Robin mentions. It was the first time he had worn a jacket and tie. The heat nearly did him in and helped him decide to go into boarding at Murree Christian School (MCS) in the cooler climate of the foothills of the Himalayas.

As Regional Director I participated in the Centenary Celebrations in April 2000, visiting Pakistan with my wife Rachel. I preached at the Centenary Service, but was also involved in some behind the scene diplomacy with Church of Pakistan leadership, which helped to change the story a little.

And for me the highlight was the contrast between The Band of the Irish Guards and the Khattak Dancers.  It was as if a history of the Raj and the NWFP was being enacted before our very eyes. The Great Game seemed somehow very real...... and as yet unfinished.


I even wrote about it in a piece I did for my masters back in December 2000, the same year as the centenary celebrations: