'Fishing in Utopia' or 'Where's Walleye'! 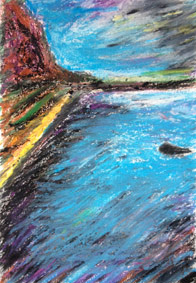 'Fishing in Utopia' is a Grantis Book by Andrew Brown (2008) subtitled 'Sweden and the Future that Disappeared'.   So its all about Sweden and I'm in Stockholm reading it at the moment, but reflecting on the fishing in Finland, which is as near as I have been to Utopia in terms of fishing.   The A6 pastel painting above is inspired by the view on arrival at a Lake house in Ahtari (picture below) The dark deep waters awash with Pike, Perch, Pike-Perch and the more elusive Walleye 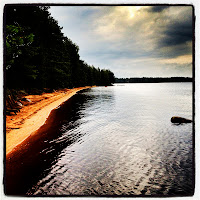 I'm not a fisherman but I enjoyed fishing on this occasion with Harri and his son, Joel.  We went our at least twice a day for a few hours at a stretch. Lake trolling I think its called, dragging a line from a small motor boat with a bright yellow and black lure.  Very relaxing.....   I enjoyed watching the shifting scenery and the beauty of creation. As well as the game of chance, which people call fishing.  I thought the game should be renamed: 'Where's Walleye'! 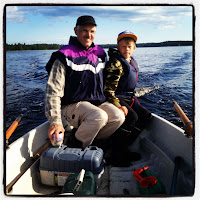 Harri and Joel  are very much at home on the Lake and fishing almost runs in their blood. They have been going to Harri's parents' summer house for years and fishing the Lake, particularly in search of Walleye, which they think is the best fish in the Lake.   And at the end of the day you bring the fish back like ancient maniners/ hunters. And eat and sauna and fall asleep happily after the late sunset (10pm) comfortably exhausted.   That's the life.......

A quotation from the 'Fishing in Utopia' book, seems appropriate:

Fishing anywhere is a form of enquiry. The patient watchful wonder of the fisherman seems to me to be the root of all science. In sea fishing this mapping and bringing of order from the formless, shifting waves is especially ambitious. Attention broods over the water like the spirit in Genesis, moving, casting, until suddenly all the possibilities are narrowed into one taut line. Perhaps this explains why I have always sought the sea at times of upset and disturbance in my life. The fish comes like an answer, the rod in my hand a divining instrument.'  (p83) 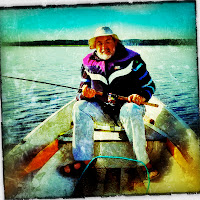 I'm a little bit more like a fish out of water.  Someone even called this picture 'the old Man and the sea'. But inspite of looking out of place and uncomfortable (some people say I look cold), I am actually having an almost 'spiritual experience' as brown described. watching, brooding ..... and I did manage to catch a 2 kilo pike, which I also later filleted and we had it for breakfast, smoked along with 4 perch that Joel had pulled effortlessly out of the water and into a bucket on board. I have to admit I enjoyed the experience immensely. Going out in the boat and watching the changing scenery, coupled with the fishing lottery......  'will I, won't I' catch one today?      It really is pretty addictive......

Joel, being a pre-teenager, would also go out on his own whenever he had the chance for even mor efishing opportunities. And so I did a quick pastel stetch of him fishing alone,  which I left him as a momento of our 'fishing in Utopia' trip. 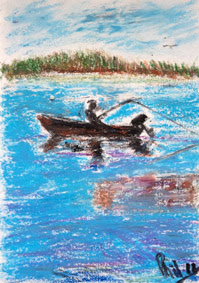 You have a great blog. It was really good fishing together and I know there are still some very big Wall-Eye waiting for another fishing trip.