The Risen Lord and a new (Asian) Dawn

I drew my own very rough, pastel version of a He Qi painting, which started out as a biro sketch during a CMS Core Training Conference. It represents the 'Resurrected Christ' or 'The Risen Lord' and seemed appropriate to post on Easter Sunday...... 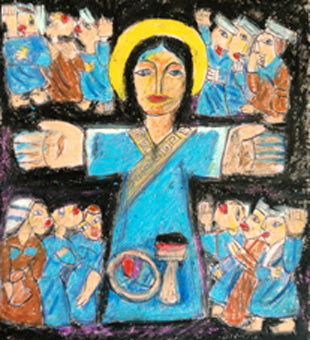 A large, transcendent, risen Christ, surrounded by 12 disciples. It looks like a dove has descended from heaven and is resting on his forehead. Echoes of his baptism: 'This is my beloved son in whom I am well pleased.'

Now he is surrounded by 12 different disciples - women and men - of Asian, Chinese origin. A new era has dawned. It has been said that the 21st century is the Asian Century of Mission. The Pope. John Paul II even prayed for such on his visit to India:

“The first millennia saw the cross planted in the soil of Europe and the second in America and Africa. May the third millennium witnesses a great harvest of faith on this vast and vital continent.

And that is my prayer too, as AsiaCMS takes off, based in Asia. That's shy I left my pen and Pastel sketch with a friend in Pakistan.

Here is He Qi's inspirational original drawing - a much sharper, clearer, more authentic Asian vision, than through my Western eyes! 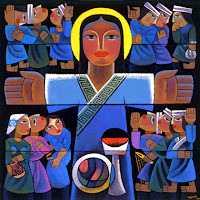