Archbishop Rowan is so good at interfaith dialogue: 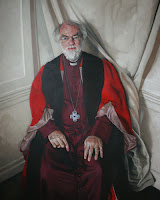 "You can only understand each other when you see the other's face turned towards God. Then and only then, can you turn to each other with expectation, patience and charity."

Portrait of Archbishop Rowan Williams by Victoria Russell
I was attending an 'Imams and Clergy' meeting where you come as a matching pair. It was run by the Chritstian-Muslim Forum - "creating spaces for Christians and Muslims to meet, learn about and understand each other"
It was hosted by the Archbishop at Lambeth Palace. With key addresses from ++ Rowan Williams, Imam Sheik Raza of Mosques and Imams National Advisory Board (MINAB), Mark Fisher of Churches Together England CTE and a flying visit from the Government Minister Andrew Stunnel, Parliamentary Under Secretary of State for Communities and Local Government (responsible for race equality, community cohesion (including the future of PREVENT), building regulations, housing and regeneration, and the implementation of the Big Society)
He emphasised the continued emphasis on social cohesion, an interfaith week in November and a Faiths in Action scheme (with grants available for £6000) currently there are 113 projects running around the country.
The over 50 participants all contrinuted in smaller groups to a discussion about how to use a statement being issued by the C-M Forum in support of local encounter covering areas like : live up to the best ; speaking generously of the other faith ; developing friendships meet each other ; work together locally (the full text will be available later and I will publish it on this blog)
The Christian Muslim Forum have also written a helpful booklet 'Local Christian-Muslim Friendship: building relationships between mosques and churches' - available as a pdf download here