'women who know their place' in Afghanistan 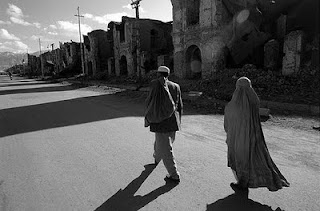 Barbara Walters, of 20/20, did a story on gender roles in Kabul, Afghanistan, several years before the Afghan conflict. She noted that women customarily walked five paces behind their husbands.

She recently returned to Kabul and observed that women still walk behind their husbands.

Despite the overthrow of the oppressive Taliban regime, the women now seem to, and are happy to, maintain the old custom.

Ms. Walters approached one of the Afghani women and asked, 'Why do you now seem happy with an old custom that you once tried so desperately to change?'

The woman looked Ms. Walters straight in the eyes, and without hesitation said, 'Land Mines'.

Moral of the story:
No matter what language you speak or where you go, BEHIND EVERY MAN THERE'S A SMART WOMAN!
Posted by MullanaNasruddin at 12:11