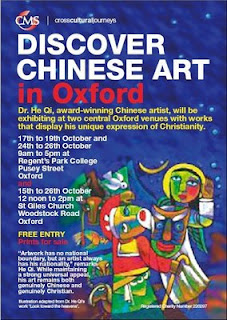 It has been a privilege to meet He Qi (pronounced Hershee like the American chocolate bar) the other day. He has joined us in Oxford as artist in residence for a couple of months. During this period he is painting a mural for our reception wall.

He uses bold colours unlike much 'mountain and water' Chinese painting, to convey a message of Peace, with a universal appeal. 'Artwork has no national boundary, but an artist always has his nationality.' His art is both genuinely Chinese and genuinely Christian. His faith is the passion behind his message. Forged in the cultural revolution, partly as a reaction to the strictess of the Maoist regime, which took its toll on his family. His art embodies his vision of hope.

I like the picture of Noah's ark, which he introduced us to: He Qi described it as his version of 'Titanic' with the Iceberg safely in the past and the rainbow symbolic of hope and promise for the future.

More of his art can be viewd on http://www.heqigallery.com/
Posted by MullanaNasruddin at 21:20