Laconic History of the World 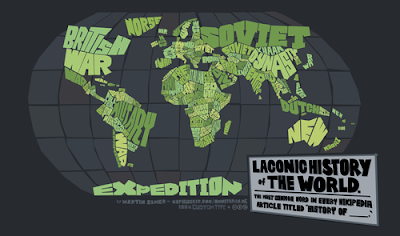 I was alerted to this amazing map via Twitter.  You must click on the full version on HugePic  to explore. But it is basically a one word 'wordle' (word cloud) on each country based on their wikipaedia History.  The  designer writes the following description on his Tumblr


Laconic History of The World (2012)
My first attempt at a typographic map. Don’t be content with the shrunken version up there: this thing is pretty dang sprawling: I’ve prepped a mind-boggling 12,500 pixel wide version you can enjoy exploring:
http://hugepic.io/d2012641f/3.00/57.89/9.67
This map was produced by running all the various countries’ “History of _____” Wikipedia article through a word cloud, then writing out the most common word to fit into the country’s boundary. The result is thousands of years of human history oversimplified into 100-some words.
I’ve also prepared a reader’s companion to highlight a few of the more interesting findings. Read it here.

How depressing! Reminds me of Bob Marley's setting of Haile Selassie's speech to the League of Nations: 'Until the philosophy which hold one race superior / And another / Inferior / Is finally / And permanently / Discredited / And abandoned / -Everywhere is war.'

Which in mind mind sent me straight to the Playing for Change version of 'No More Trouble':  if you've not heard it before you really should .......