Angels watching over you

I was out with Woking Street Angels again on Saturday night – part of the Jubilee Celebration weekend.  We were 8 angels and a visitor in our 'cohort'.
Our team of 3 included Caroline, who had met the angels when she was out partying a couple of years ago. She is a mother of two and was thinking about joining SAs, so she walked the streets with us til midnight. She found it fascinating to be on the 'other side' as she put it. 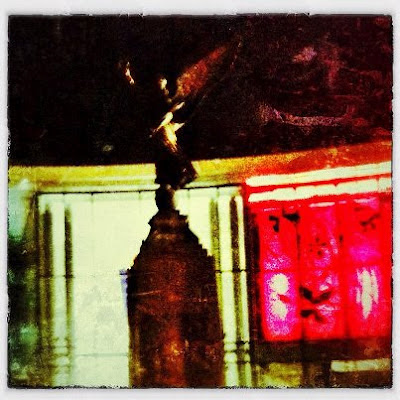 The first shift of 2 hours went very slowly. We talked together and greeted one and all. I chatted with Haroon/Harry, the Pakistani bouncer at Subway.  A bright, well-spoken young man,  he holds down 3 jobs to build a better future for himself.  A not-quite-sober man came up to him as we were talking. Tom asked to use the loo and Haroon explained it was out of action. ‘No problem’ he quickly retorted ‘I’m a plumber and earn £140 a day. I’ll fix it.  ‘But, you’re not authorised  to work here… Haroon insisted politely. Tom was not happy and swerved off to relieve himself elsewhere. Haroon commented that it is hard to be polite all the time.

We spent the evening chatting to people, picking up bottles at one point sent off on a couple of wild goose chases. One after hearing of trouble in the town square. But the town centre is a building site with extensive renovations. The new Café Rouge is now open, and on this night it was the only source of activity, though very quiet. 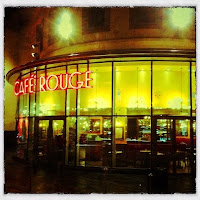 And the other time a passerby near Weatherspoons told us that there were some very drunk teenagers near the bandstand (by Toys’R’us).  When we got there … nothing.
It felt like an 'almost and nearly' evening, we 'almost' got there on time, we 'nearly' saw a fight. We never seemed in the right place at the right time. Bu we did walk a lot – good exercise!
There were lots of police around, and they seemed to turn up in places on time.  An arrest under the station canopy, we heard on the radio and from the bouncer at Yates about a man who had pulled a knife and had been taken off by the police.  And of a double arrest at the Chameleon.
One Angel team spent a lot of time with a very drunk Italian girl and her Swedish friend who had been thrown out of BEd Bar. Their ID and keys were in their bags in the lockers inside. But they had lost the cloakroom tickets.  Eventually after lots of time and sympathy and negotiation, the team were able to negotiate with door staff and the bags were retrieved. And then put in a taxi home. That is, after all the ultimate aim. that people get home safely.

A mysterious hand
Walking down street a girl stuck a hand out of her car and thrust a postcard sized leaflet towards us: 'Hell awaits a sinner ….. but Jesus died for your sins'
She asked ‘Are you saved?’  I must admit it is years, since that has happened.
There was a heaviness and intensity about her, a wistfulness and distance, as she sat in the driver’s seat of the car and handed over the tract. She had a passion for the lost and said she was from a church in Ottershaw. She wanted to know, if the church we went to was: ‘born again’. I responded  ‘Yes, again and again and again…!’  Her two friends returned with some coffee and they drove off.
The leaflet implied that being out on the street at night, drinking, partying … was being on a path to hell. I felt uneasy about it. There was a picture of two escalators one going up and the other going down… with a sign saying “it’s your choice' <=>  There were bible verses on the back talking of everlasting life (John 3:16) and being born again (John 3:3) and a picture of three crosses. It finished with: ‘if you confess….  Jesus is Lord…you will be saved’ (Rom 10:9)
I was left wondering if it really communicated to the partying community in Chertsey Road. The encounter left us reflecting on how do you reach the ‘least, the last and the lost’. Does a leaflet really do it?
For me. I prefer a more gentle approach, summed up by prayer we prayed at the beginning of the evening before we went out. I’d found the book of prayers from Iona in the Horsell Hospice bookshop only that morning. (‘Each Day & Each Night: Celtic prayers from Iona’ J. Philip Newell, Wild Goose Publication, 2002)  It seemed to express the spirit of ‘Street Angels’

Watch now O Christ,
with those who are weary
or wandering
or weeping this night.
Guide them to a house
of your peace
and lead me to be caring
for their tears. 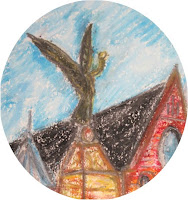 Watching out for people and simple caring (out of a motivation of love) and guiding them safely home, does itself speaks volumes…     Sometimes it feels like a 'mysterious hand' is with us, guiding, watching, supporting.

at the end of the day, to use the title of another (controversial) book by Rob Bell:  ‘Love Wins’
I wrote about that earlier  in two parts: The Prodigal's Return and Between Heaven and Hell
Posted by MullanaNasruddin at 11:56

Interesting and I love that prayer, thank you!

I must admit, I liked the prayer much more than the leaflet being handed out ....