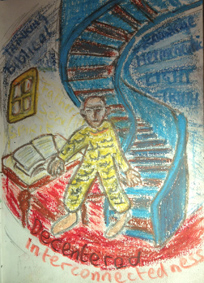 My picture ‘Decentred Interconnectedness’  is based on ‘Academic with an Open Book’ - a picture developed by Gert Swart and Zak Benjamin  - see below -  on the front cover of 'Renewing Biblical Interpretation' (Ed Criag Bartholomew).


'Decentred Interconnectedness'   has the central image of a person - the student/ thinker with one hand on a open book and the other by the bottom of a spiral staircase.  He is surrounded by words : 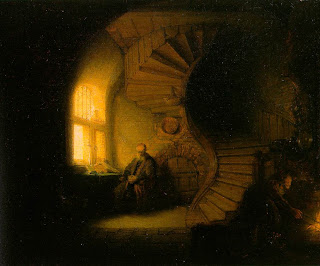 ..in the Rembrant there is a distict feeling of Yin and Yang - the tail of one half starting from the top of the stairs to the pool of lighincorporating the window and the philosophers head. The tail of the other half starts from the light at the feet of the philosopher, and goes up the stairs to a 'pool of darkness', completing the Yin-Yang motif, In Chinese Philosophy Yin and Yan are opposing principles omplementing each other, but in the Rembrant the tension between them in focused i the person of the philosopher with his 'light' head and 'dark' lower body'
The Rembrant is full of contrasts that express the tensions in the painting between:
There is also a circularity, mandala, a striving for wholeness. The excluded woman stoking the fire is significant - outside fo the circle in 17rth century Europe. The philosopher's book is open but the philosopher seems closed adn diosconnected fromt he book, the world outside and whatever lies at the top of the staircase! The philosopher is at the centre of the unresolved tensions in the context of a light-darkness struggle for wholeness' 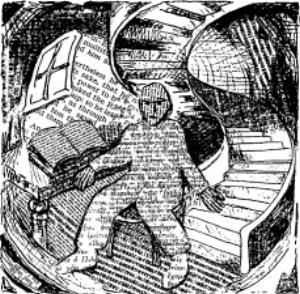 'in the Swart-Benjamin reworking the content has been compressed into a square that creates a feeling of stability. Within the square there is a n obvious circular feeling whic speaks of resolution and completness. Bith the square and the circularity speak of whleess. The fugure of the academic has been flattened and opened up to create a sense of urgency and hope. The ethos of the 'Academic with an Open Book' is thus radically different from the Rembrant'

Thus, in a variety of ways, 'Academic with an Open Book'  represents ‘the possibilities and challenges of academics working with the Bible as Scripture. The reworking alerts us to the potential and significance of an open Book – the open Book mediates resolution and potential wholeness into our brokenness. But that very possibility calls for urgent re-examination of a host of issues…’ (Bartholomew et al., 2000 p xxi)

Or going back to my picture  A new 'decentred, interconnected' world  is literally at the student/academic's feet!