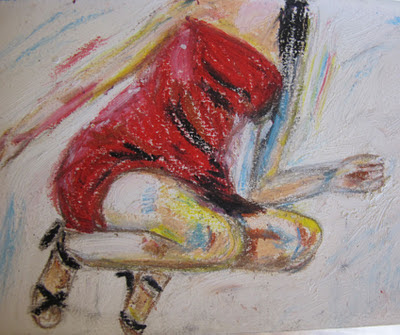 Another oil pastel of a girl partying, inspired by a series of large painting I saw in a London Restaurant.  The originals were done by Paul Lemmon as part of an Exhibition: 'a Slice of Lemmon' put on by the Art Movement.  Other picture featured  in previous blogs

Given the near freezing temperatures it made me think how COLD it is on a Saturday night in Winter Woking when you are just dressed up to party. We were on another 'street angels' shift from 10pm on Saturday night til 4 am on Sunday morning.

'Saturday Night and Sunday Morning' was the name of a novel by Alan Sillitoe (1958), which was made into a film with Albert Finney (1960). Over half a century ago. It portrays life in the raw, in the urbanised sprawl of the industrialised Britain. The drudgery of factory work as a machinist during the week and spending wages at the weekends ,"drinking and having a good time".  Nothing is new under the sun   and the same pattern continues for many ...... The traumas of the week are played out at the weekends

Mind you we cannot see beyond a small glimpse of what people are going through. As Street Angels, we meet people 'by chance' on the streets and get involved with a  few for a short period of time.  I was patrolling with one of the newly commissioned angels – ‘the reinforcements’ which meant we could now cover Saturdays as well as Friday nights.

It always starts out quiet with people intent on going out and ‘having a good time.’ So that’s the time we walk and talk and get to know each other and greet one and all.  Galaxy Cabs have constructed a new control centre – and we met the Pakistani owner and ended up talking about his father who died early in the year aged 102!  He had served in the British army and been evacuated from Dunkirk.

Michelle from Maybury was very drunk and had been kicked out of RSVP and couldn’t get into Chameleon. She was sitting on a wall on her own  and could hardly sit straight. We stayed with her and tried to get her to contact her friends.  She was COLD in her minimalist dress. We walked her to MacDonalds and sat with her for a while. She wouldn’t have a coffee but ordered a burger. And we couldn’t stay there all night. Outside again we tried a space blanket, but she just looked like an oven-ready chicken.  It was only when a policewoman suggested she go home that she agreed, so we found a taxi and that we thought was that.

It was only later we discovered she had been sick all over the back seat and the taxi had returned to base. She had stumbled out and according to the taxi-driver was escorted home much later, by the police. As I said you only ever hear part of the story….

Otherwise the usual picking up bottles,  and giving out our trademark 'lollipops and flip flops' (not so many tonight). We also got called out to the other side of Woking Railway station in response to a radio call about a distressed girl,  but whatever the situation was  had finished when we arrived.  Back on the Chertsey Road, a couple were having an argument opposite Subway but they made it abundantly clear they didn’t need any ‘interfering do-gooders’. We just ensured CCTV kept an eye on it, cos the girl had banged her head against a shop window lots of times

After 3am the Chameleon punters spilled out onto Chertsey Road and a fight broke out on the street    It looked like 10 against 2. But it was really difficult to work out what was happening   I thought they were messing about.  But one lost a number of teeth, the other had cuts a round his ears. The odds were certainly stacked against the two guys.  The angels, called a police officer and talked to the guys afterwards as the police took verbal statements and generally calmed things down. One thing I learned from the incident is how very difficult it is, as a witness to a fight, to work out what is going on. I’ve no idea how people stand up in court and tell ‘the truth, the whole truth and nothing but the truth’.  I’m sure CCTV camera’s help. But so much is open to interpretation.

At the end of the shift, in the wee hours of Sunday morning, as we were making our way back to base, we met Mark, a bouncer at one of the clubs, who had been in the army ('The Vikings') and was wounded in Helmand. He knew my fellow angel well from the army camp in Pirbright. I was impressed at his cheerfulness, given all he had been through. Funny how some people seem to come through trouble and rise above it, discovering the newness of Sunday morning, whilst others seem to fall victim and get stuck in the perpetual round of Saturday nights.........

Thanks for this entry, very good reading.