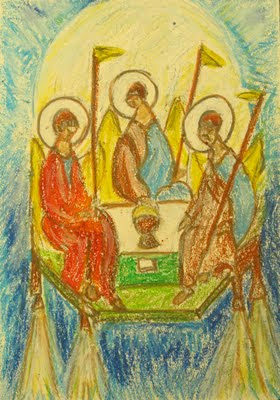 The image is a bit of a doodle that became a version of Rublev’s Icon of the Trinity crossed with a hint of Eric von Daniken ‘Chariots of the Gods: I remember asking 'was God an Astronaut’ as a youth)


The mysterious visit of the 3 men/angels in Genesis 18, who somehow represent the Trinity in Orthodox thinking, lends itself to a bit of speculation, full of mystery.
My picture came about as a result of drawing the halos which somehow looked like space helmets, and it sort of took off from there...... !
I can vividly remember watching the Apollo moon landings, so maybe in our age its appropriate to portray the church in these cosmic terms...

CMS was hosting a visit by 4 Korean clergy, who wanted to look at Mission Shaped Church. We attended the Fresh Expressions and Pioneering conference run by centre for Pioneer Learning It was too good an opportunity to miss.
Over 50 participants gathered from mainly from Europe - Scandinavia, Germany, France,
Scotland. US and Canada: Australia and New Zealand. Plus the 4 Koreans.
Dave Male with input from Andrew Roberts on the Mission Shaped Ministry (MSM) course, Adrian Chatfield on mission-shaped spirituality. Bishop Graham Cray on the mission shaped movement; and Mike Moynaugh on mission-shaped theology. Everything was mission shaped. Even the sandwiches were mission shaped (they were nice triangles!)
SPECIAL EFFECTS

Fresh Expressions is often abbreviated as FX. For me that is Special Effects (I remember the movie of that name and FX2 the deadly art of illusion. Maybe that is what the Church is seeking to do - add some special effects making it more trendy, more audio-visual, more sexy, more appealing in the 21st century. enabling church to take somehow off.
Special effects can be gimmicky, all about lights and tricks and illusions. there can be expectations on pioneers to be similarly gimmicky.
Yet I was struck by how 'ordinary' many FX churches are : Messy church; Cafe church; Network church; rural church; Cell-church run by people who are trying to be essentially Mission-Shaped.
We visited Thirst a Friday morning Cafe Church meeting in a school and Cambourne, an ecumenical (Anglican Baptist Methodist URC) Church which started in a garage and a Doctors surgery and now has an expandable A-frame church building in the middle of a new Estate. And there was nothing gimmicky about them. They were ordinary people trying to make the church relevant to their context.

Like the star ship enterprise, there is a sense of pioneering being about 'going boldly where no man has gone before' A lot is experimental and exploratory, tentative and partial informal and flexible.
Pioneers are people who don't quite fit in with the centre, and like to push out into unexplored territory, they are happy on the edge.

IT'S NOT ROCKET SCIENCE!

Graham Cray reminded us its not rocket science. a Fresh Expression is defined simply as 'a form of church for our changing culture, established primarily for the benefit of people who are not yet members of any church'
The Archbishop of Canterbury coined the phrase Mixed Economy to describe the range of church, traditional and modern , fresh expressions Not either or but BOTH/ AND. "celebrating and building on what is mission -shaped in traditional forms of church and finding new, flexible appropriate ways to proclaim the Gospel afresh to those who do not relate to traditional ways" Permission has been given to allow Church to take off.

Back to the Trinity and Rublev's ICON. Mike Moynaugh reminded us that the Missio Dei originated in the Tri-unity of God, drawing us into Communion. Mission is the eternal decision of God the Trinity 'communion in mission;
which the church takes and becomes 'community in mission' The church is misisonary and 'becomes missionary by attending to each and every context in which it finds itself' - 'The word became flesh and moved into the neighbourhood'
There is a sense that in Church, (FX or not), we are creating something 'other worldly', because in church we encounter the Divine....  sort of 'Close Encounters of the Third Kind'

thanks for your thoughts. i would have liked to attend.

Andrew You were missed - and mentioned in dispatches