‘At the centre and on the margins’ 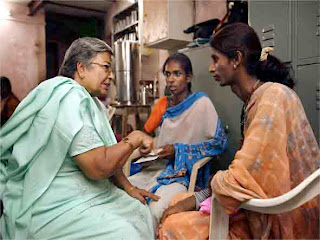 Dr Laiita Edwardes stared working at Pune and befriending Hijra or Kinnar (Eunuchs), who she calls ‘God’s special people.’ I met Panna, Koelli and Stella. All three have come out of the trade. We talked, they danced and Panna sang: ‘Koi bhi chore mujhe, Yesus kebhi nehin chorega’ (even if others leave me, Jesus will never leave me) Dr Lalita has served them, demonstrating unconditional love. It was a real lesson in acceptance.

This focus on the margins is reflected in our partnerships: Anti-trafficking in Bangladesh, Islamabad Christians against Narcotics, Delhi Brotherhoods shelter for street children. Ministry to hearing impaired in Tamil Nadu, Visranti ministry to abused women in Kerala.

Colonial Past Heritage and legacy

In the mid 19th century CMS began work with the ancient churches in India. They concentrated on renewing Theological Education, helping the life and liturgy of the church, so it could be a missionary force.

CMS was opportunistic, engaging with ancient cultures, religions and other traditions, translating sacred texts and books, contributing to a revival of learning for all in the ancient civilisations of Asia.

The social work heritage, female education, health work with untouchables, has contributed to bringing dignity for all people. This is more than the traditional medical, education and church institutions which also developed from ‘starting small’. (see Venn principles – Henry Venn was an early CMS General Secretary)

I have met many in South Asia who have deeper claims to being CMS than I have, born in a ‘CMS hospital’, graduated from a ‘CMS school’ or a member of a ‘CMS church’.

Part of working at the Centre has been to work with the established churches many of which CMS helped to found - the United Churches in South India CSI and North India (CNI) , and In Pakistan (COP) The Anglican Church of Ceylon and the National Churches Fellowship of Nepal. These remain our traditional partners.

I also visited Chennai (Madras) in search of St Thomas who brought Christianity in 52AD. What struck me was that the disciple who doubted the most went the furthest. And our most ancient partners – the Syrian Orthodox and Mar Thoma churches trace the foundation of their church to Thomas’s arrival and ministry. The Christian legacy is deeper than the British Raj.

The Indian subcontinent is a vast geographical area and a growing economic force, part of the rising economic BRIC Nations (Brazil, Russia, India and China.

Indeed the ‘CHINDIA” phenomena as it has been called, suggests that China and India will change the economic face of Asia and probably the spiritual face as well.

New Mission movements are part of this spiritual change of face:

CMS acts as a bridge between existing and emerging church movements. We have encouraged this growth through Leadership development, discipleship training and scholarships.

Ram Prasad from Nepal has been supported through various programmes, and now as a Co-Mission Partner, he is making a significant contribution to the growth of the Nepali mission movement through his leadership in the Mission Commission of Nepal.

South Asian Christian Youth Network brings together youth form the established and more emerging partnerships from all over the Indian Subcontinent. Over the years SACYN has been ‘Called to Peace’ in Sri Lanka and looked at ‘Gospel and Globalisation’ in Bangalore. And becoming ‘Bridge Builders’ in Pokhara Nepal in May 2010

The challenges of the subcontinent are vast. There is real need for Integral Mission, for a holistic social transformational Gospel meeting some of the challenges on the edges - Indigenous Mission reaching out to the tribal peoples of NE India. The untouchables. Himalayan Arch and the strategic place of Nepal. Myanmar, Tibet, Pakistan, Afghanistan and Central Asian republics. How to connect up the Chinese and India movements.

The field is vast but the harvesters are already being mobilised from within the region. Our task is to work alongside them

If Indian churches get together, then there is no need to look elsewhere…. Our people are encountering Missionaries from South India. We see their dedication and are challenged….CMS has adapted to the changing situation, doing mission with the locals. Now God has opened a door. It is a new Avatar (incarnation) - an Indian CMS - an Asian entity with a new face.