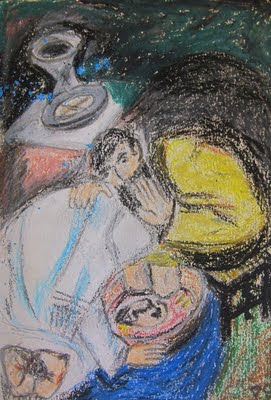 The painting is another copy of Sieger Koeder's, the catholic priest-painter. As you can tell I like his pictures. This time it is Jesus washing the feet of his disciple. The ultimate example of Servant leadership. I particularly like the idea of Jesus face reflected in the water of the bowl he is using. The story has inpsired many to go and do likewise....

I have been reading Simon Walkers book: ‘The Undefended Life: Recovering God’s Freedom to Live Beyond Fear’ (2011) whilst on holiday. Leant to me by a colleague, so I needed to finish it before I get back. I have ordered the trilogy from Amazon but they did not arrive on time. I’ll read them later: ‘Leading Out of Who You Are’ (2007); ‘Leading with Nothing to Lose’ (2007) and ‘Leading with Everything to Give’ (2009)

Simon Walker has developed the Personal ecology profile, based on his brief introduction to the theory of `Human Ecology’ (2009)

The Undefended Life book I’m reading, deals with the theology behind his undefended leader trilogy. He draws on people like Jurgen Moltmann: ‘The Crucified God’ (1974) and ‘Trinity and Kingdom’ (1981) and Paul Fiddes: ‘Creative suffering of God’ (1988) and ‘Participating in God’ (2000)

(i) ability to live life as Gift;

(ii) living in the present moment;

Wherever you are, be all there (Jim Elliott)

Maturity is the freedom to live an undefended life (Melanie Kline)

‘If a man wishes to be sure of the road he treads on, he must close his eyes and walk in the dark’ (St John of the cross)

I found myself agreeing strongly with lots of what he has written, so I quote a great chunk of one particular passage on leadership (page 100). It captures some very helpful insights into the type of servant leadership Jesus epitomised when he washed his disciples feet:

Leadership itself is an act of followership. There is no such thing as leadership in the sense of executive agency and decision-making that we often take it to mean. The leader is not in the business of taking decisions about the things that happen. Rather she should be in the business of responding to the leading of God’s Spirit.

The only kind of leadership possible is described in John 5:19, where the Son describes his following of the movements of the divine Father. The chief quality of the leader, then, should not be the capacity to make decisions or be visionary, but rather to listen and be attentive.

It is startling that we often seek to train our leaders to be better communicators (by which we mean ‘speakers’) believing that leadership is some act of persuasion. In fact, we should be looking for individuals who have cultivated a stillness of spirit such that they can attend to the movements of God. We should look for leaders who are sensitive to the tone of the room, to the unconscious voices in the discussion. We should be elevating women and men who have an awareness of the spiritual dimension to life, that runs in parallel to this world.

I am not in the slightest bit interested in following men and women who can depict some grand vision, or who have a confidence about ‘the way we should be doing things’. I want to follow and learn from the men and women who struggle with the pain in the world and who are generous, kind, self-effacing, seeking to learn, fragile, patient, still and free, those who have known failure and not been crushed. I want to follow the one who can laugh at him- or herself and who does not try to achieve mighty things.

As someone once said: ‘The immature man seeks to die heroically for a cause; the mature seeks to live humbly for one’

As an alternative to the WWJD wrist-band (what would Jesus do), I have often thought it should read DWYSTFD – which sounds like a place in Wales! ‘Doing what you see the Father doing’, which is, after all, just what Jesus did:

The son can only do what he sees the father doing because whatever the Father does the son does also. For the Father loves the son and shows him all that he does (John 5:19)

Love it! Next the workshop!